Posted on September 11, 2019 by JtoJ in International, News

I Am A Proud Hong Konger

I am a proud Hong Konger.  Born and educated here, but also a white English speaker – with citizenship elsewhere. Many recent commentators would try and have you believe my presence at the protests confirms foreign intervention, a hidden international agenda. Some say that I, and the other two million protesters are paid, and give undeserved focus to the seven people holding Stars and Stripes flags. Perhaps to some it is inconceivable that for the last 13 weeks Hong Kongers actually choose to spend weekends shuffling slowly in muggy, humid heat and pouring rain, solely to stand up for what we believe in, our basic human rights; freedom of speech, democracy, a fair and just rule of law, and to live without fear of police brutality.

But the truth is that simple.

Kick started in retaliation to a proposed anti-extradition to China law, the movement swiftly took on a greater purpose calling for democracy and the implementation of genuine universal suffrage. The aims grew as police violence escalated, and an independent enquiry into their excessive and brutal use of force was demanded. In calling protests‘riots’ assemblies became illegal,due to a 1967 colonial law introduced to combat anti-British civil unrest, and led to the demand retracting this term. Finally, calling for the unconditional release of arrested protesters and charges dropped.

These demands are not borne from ‘radicals,’ but from the majority of Hong Kong society – all professions. Every sector has held their own solidarity rallies; doctors, teachers, lawyers – even civil servants. The protests are often mis-portrayed as a ‘youth movement.’ They span all ages; the elderly even seen standing on the frontline, unprotected, squaring up to the riot police. Students at the airport greeting foreigners whilst also head down studying their text books.  School children are striking; singing, holding hands forming protest chains.

The term ‘radical protesters’ also crops up but in 2019 is democracy really such a radical idea? Disappointingly many condemning comments come from those living in democratic societies, free to speak their minds politically. Do Hong Kongers not also deserve this? Hong Kong is a conservative society, but citizens want to be able to elect their own leader, critique the government and have free political debate. Does fighting for this not warrant inconvenience? Are people stillnot more important than profits? The small-scale violence occasionally used highlights willingness to risk own life and liberty. It is targeted and not mindless. Eight people have committed suicide in the name of this movement and it’s not much short of a miracle that a life has not been lost due to police tactics.

Previously proud of ‘Asia’s finest’ police force, Hong Kongers watched on horrified as peaceful protesters returning home were brutality beaten inside a subway (MTR) station by triads; criminal gangs. Police arrived only 45 minutes later, and did almost nothing. The collusion between triads, police & government blindingly, and scarily obvious. The government says little, only occasionally speaking to ‘strongly condemn protestors,’ but mute regarding ruthless police attacks, sometimes occurring whilst dressedas protestors. Thanks to a core of bold journalists there is extensive video evidence of this.

Tear gas and pepper spray has become the usual response to any small gathering; expired toxic canisters shot in residential areas and enclosed spaces – at train stations towards unprotected civilians. Frontline protestors have lost their fear; throwing back, or dousing them with traffic cones or wok lids. It’s become common place to see people walking in gas masks, goggles and even helmets, just in case. People have been attacked and arrested walking home, leading to impromptu protests in residential areas late at night. The footage of these is quite something; citizens of all ages, dressed in flip flops and shorts coming out of their homes demanding the police release the arrested and leave. 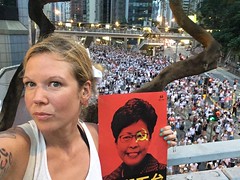 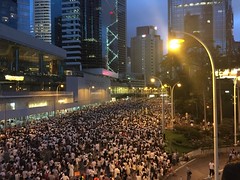 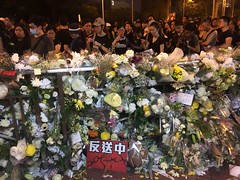 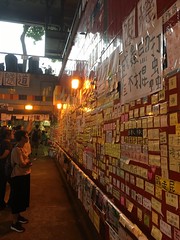 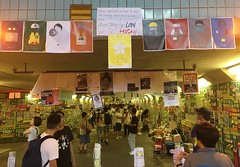 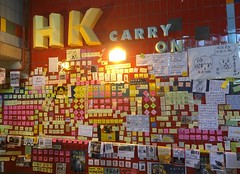 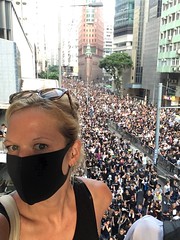 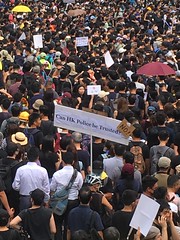 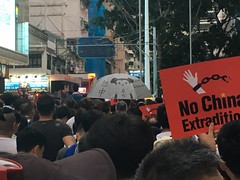 Hong Kongers are often misunderstood; the general view being money-obsessed and politically apathetic. Residing in one of the worlds’ most expensive cities – cramped living conditions and six-day work weeks are the norm – money IS an issue. But what is not spoken about so extensively is the community spirit and care that Hong Kongers show each other, alongside their can-do, creative, resourceful and resilient attitude, which is what made this city flourish even under a colonial rule. The ‘haves,’ are a small minority. These very emotional and testing times have showcased what it means to be a Hong Konger, incredible kindness, intelligence and humour. Being gridlocked for hours spirits remain high; food and drinks shared, discussions had, songs sung and hand signals used for immediate help for those that need it – the instant parting of crowds to let ambulances through, first-aiders putting themselves at risk to help others. It’s amazing to witness, but even more amazing to be part of.

There is no leadership in this movement, it is everyone for everyone, working together, and this will continue, until all five demands are met.