Extraordinary conference on Civil Rights Documentary Cinema and the 1960s at the British Academy, London 24-26 May 2016

Extraordinary conference with internationally acclaimed film makers, historians& activists on Civil Rights Documentary Cinema and the 1960s: Transatlantic Conversations on History, Race and Rights at the British Academy, London 24-26 May 2016

Help us bring Journey to Justice to Edinburgh

Are you interested in human rights history, arts and social change?

Journey to Justice is proud to partner Motown: The Musical, now showing at the Shaftesbury Theatre, London. We plan to work together with young people, schools, youth and community groups,  exploring how music inspires and empowers people to take action for social justice.

“As Black Americans, the experience we had known was of not being able to drink out of the same water fountains and playing to segregated audiences…Music was one of the components helping that fall away…. It really felt like we were doing something significant.” …

First expel or murder your enemies, then trash their cultural artefacts.

As humankind’s capacity to inflict death and destruction has increased with advances in the technological and military fields, we have witnessed whole groups of people subject to actual or attempted extermination. However, legends, sagas and religious scripture suggest that this alarming inclination in the human species has an ancient pedigree.

The persecution of the despised ‘other’ rarely ends with murder alone. Perpetrators have a tendency thereafter to remove all physical evidence that the ‘absent’ people ever existed. Moveable artefacts such as books, paintings, sculptures and religious items are stolen, destroyed or sold to collectors far away. Houses are occupied by those …

Posted on December 4, 2015 by Ashby McGowan in News

Ten years ago I started writing material for the pupils in my school’s Amnesty International Youth Group to perform. The subject was domestic violence and I thought of using their voices in a way that would allow the sounds of the words to complement the actions in the poem. So when there was something bad happening, the joining of words and phrases would result in a cacophony. When there was resolution or peaceful thoughts, the voices would blend to produce a pleasant sound. Voices can also be used to create subtle rhythms that build up in the poem.

Why Study ‘Massive Resistance’ to the Civil Rights Movement?

Posted on November 27, 2015 by Scott Weightman in News

The study of the civil rights movement has largely focused on the African-American struggle for freedom and offers an expansive, vibrant and ever developing understanding of civil rights campaigners. Indeed, the dynamic and multifaceted nature of the Black protest movement has necessitated successive scholarly reinterpretations in order to attain a true picture of the movement. It is a topic that continues to garner interest and foster new debates.

Conversely, segregationist opposition to the civil rights movement has received far less attention. Whilst commendable as an indication of the generally liberal values of the academic community and understandable given the nobility of the …

Bias: The enemy of Justice?

As a Bachelor(ette) of Honours in History, it is easy to assume that every bias exists primarily due to events in History. Religion, economic status and political views are often handed to us by our parents; how many people transcend the status they were born into? In accepting that bias is also potentially affected by personality, present situation and a lack of thought, I couldn’t help but wonder: is bias intrinsic to human nature? Can we educate ourselves above bias? How far does bias hinder the journey to justice?

Social justice is a broad term. The Oxford English Dictionary defines it as “Justice in terms of the distribution of wealth, opportunities, and privileges within a society.” In other words, social justice aims to create equality.

I recently completed a journalistic project on political representation in the UK, where there is clear inequality. Following May’s General Election, the undeniable fact that we as a country had elected our most diverse Parliament ever, made a few ripples in the media. More female MPs had been elected than ever before. More MPs from a BME background had been elected than ever before. The …

The Activist’s Balance: Reaction and Creation

Posted on October 19, 2015 by Rebecca Livesey-Wright in News

As with all things in life, activism should be based on balance. Everyone has their own centre of balance and we should each feel comfortable with knowing how hard we can fight before we hit the activist’s ‘burn out’. We need to find a balance not only between fighting and resting but also between reacting and creating.

In Spring 2015, I was heavily involved in the four-week occupation at my college, Central St. Martins, University of the Arts London in response to the proposed closure of hundreds of courses. This was an intense and exhausting period, but …

‘The people decided: the country must be defended’. This is the claim of a new poster, displayed as part of the latest government campaign in Hungary. True to government promises, police started to defend Hungary at the newly built wire fence on the Serbian border, where refugees, including children, were subjected to water guns and tear-gas. An Associated Press journalist reported that police forced him to delete the film he took of a police dog attacking refugees. Police denied that such an event took place. Members of a Serbian TV crew also complained that Hungarian …

Calais; an observation of the active volunteer

Posted on October 19, 2015 by Joanna-May Sutton Klein in News

Many people care about a plethora of issues within the realms of social justice and some have an ideological perspective. Occasionally something compels them to act on an issue. There is no science to explain all the reasons people become active in the name of their beliefs. This summer, as I watched the news coverage of the unfolding refugee crisis, I found the story resonating within me.

I am Jewish, and for me, I could not help but see history repeating itself in the Calais refugee camp. This evoked an unavoidable sense of …

Racial Stereotypes: how far have we come?

The end of the nineteenth century in Charleston; a rise in crime. Assaults, robberies, prostitution, illegal trafficking and gambling, with fights and stabbings frequent. Bootlegging was the only option for many poor African-Americans who could not afford to pay for expensive goods. Wealthy African-Americans often requested the protection of police because they were afraid to leave their homes in case they were broken into by members of their own race.

Journey to Justice at News from Nowhere, Leytonstone 13.09.14

Journey to Justice is an organisation that seeks to inspire and encourage local activities dedicated to equality and respect.  Working through education and arts Journey to Justice draws on the history of the Civil Rights Movement in the United States of America for its first project – a multi-media travelling exhibition.  While using the figurehead Martin Luther King, with recordings of his speeches and archive film, the programme will tell the stories of lesser known figures, with whom most of us can …

Gary Younge and Russell Brand on Ferguson, Missouri, ‘Everything has changed and nothing has changed.’
http://www.theguardian.com/commentisfree/2014/aug/15/michael-brown-ferguson-america-racism
https://www.youtube.com/watch?v=RU_Z7kD5i7g&list=UUswH8ovgUp5Bdg-0_JTYFNw

It’s no secret that young people are suffering from unemployment. According to recent research by the Prince’s Trust, almost a million young people across the UK are struggling to find a job while 40% of jobless young people have faced symptoms of mental illness as a result of being out of work.

Despite the UK supposedly having overcome recession, young people are still left jobless, and a high number of those unemployed are being diagnosed with depression, panic attacks or anxiety.

Society expects us to have figured out exactly what we want …

It’s about Walter Tull, the first black footballer to be signed by Spurs Football Team and the first black offer in the British Army in WW1. He suffered a horrendous amount of racial abuse and he was dropped by Spurs.  An injustice was also done when Tull was turned down for the Military Cross on account of his race.

On 21 June the wonderful Conway Hall was host to our launch – a night of song, dance, poetry, film and speeches celebrating movements for social justice – compered by our Chairman Mark Hutchinson.  There was a  full house and teams of dedicated volunteers prepared delicious food and drink, all donated. The launch was made possible by our funders and the hard work of 40 volunteers and 45 performers. Many in the audience have given to our crowd funding campaign – thank you! 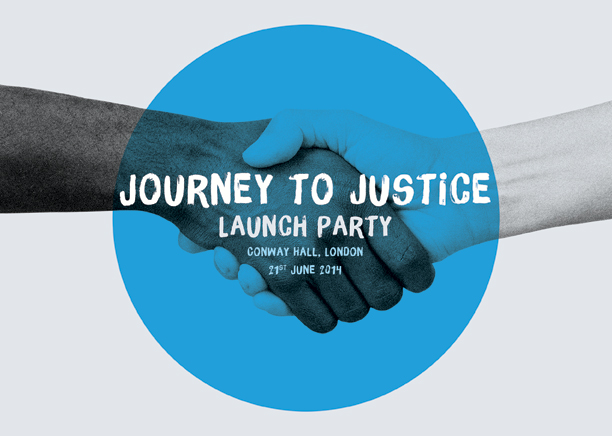 Welcome by Chair of Journey to Justice, Mark Hutchinson

“Ben, make sure you play ‘Precious Lord, Take My Hand’ in the meeting tonight, play it real pretty.”

These were the last words uttered by Martin Luther King on 4th April 1968 to the musician Ben Branch.  Today, Journey to Justice launches its first project examining the creativity of and links between the American civil rights movement and social protest in Britain. King’s words hint at the inextricable link between struggle and song. Many have been inspired by the principles and passion that were invoked and the manner and methods used in the struggle for human dignity and justice. And for …

Welcome by Director of Journey To Justice, Carrie Supple

All campaigns for justice are made up of individual journeys and everyone has a story to tell. June 21st 2014 is the 50th anniversary of the murder of civil rights workers, James Chaney, Andy Goodman and Michael Schwerner in Mississippi. The launch of Journey to Justice is dedicated to their memory. We remember Kevin Gately who was killed 40 years ago in a demonstration against the National Front, here in Red Lion Square.

It’s remarkable how much Journey to Justice has achieved in a year by what is essentially a group of volunteers. Huge thanks to the …