JtoJ patron who played such an active role in anti-racist campaigns for decades, seen here at the JtoJ Bristol exhibition in 2017. 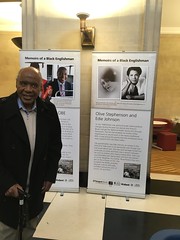 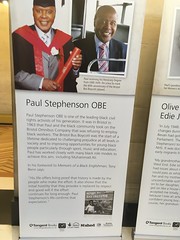 JtoJ trustee Dr Madge Dresser co-ordinated plans to bring JtoJ to Bristol with an impressive local steering group created after Parul Motin & Martin Spafford (JtoJ trustees) led a powerful taster day with her in October 2016. We were very grateful to our local partners including UWE (the University of the West of England), Bristol University, Bristol City Hall and Bristol cathedral for its offer of the stunning Chapter Room where our exhibition was displayed. Some of Bristol’s many community and arts groups and schools were involved and the exhibition highlighted  less told stories of the city’s famous history which though more well known for its involvement in slavery also has a lesser known activist counterculture committed to social justice. Over the past two centuries, Bristolians have organised anti-slavery campaigns,  rioted for political rights, propagandised for prison reform, marched for women’s suffrage, demonstrated  against fascism, boycotted against racism,  and organised variety of innovative struggles for  housing,  sustainable development and against domestic violence and homophobia. The steering group planned a fantastic range of local events.

“I Belong Here!” a Somali journey through Bristol: PDF Guide

The attached guide ”I Belong Here! “ a Somali journey through Bristol’ is a city history trail with a difference. It brings together some of the little-known stories about Muslims and other immigrant groups in the city and shows how they relate to the monuments and buildings people pass by everyday in the centre of Bristol.

The guide grew out of a series of guided walks and trips JtoJ has done since 2017 with various groups including the Bristol Somali Resource Centre and members from the wider Somali community. Devised  in consultation with the BSRC and funded by the Home Office’s “Building a Stronger Britain Together” programme, it aims to foster a more inclusive story of the city’s past. JtoJ trustee and academic historian Dr. Madge Dresser provided the historic content which also includes basic information about Bristol’s architecture through the ages as well as a timeline of immigrant groups arriving in the city.

Rich Grove, a website designer and public historian designed the guide and provided most of the photographs and the well-known  artist  Mark Sand was commissioned to paint a rather cheeky Somali version of the Bristol coat of arms.  The guide can be adapted to focus on the history of other marginalised groups in the city and people are free to use the guide with pupils and community groups so long as they agree to acknowledge us when they do so.

“I belong here!” a Bristol Somali Journey through Bristol’  (February-December 2018)

This project grew out of a series of inter-generational workshops Journey to Justice held last October in partnership with the Bristol Somali Resource Centre.  Its aim is to get people able to find their way around Bristol with more confidence, meet others in their community and learn a bit about the city’s history in a way that relates to their experience. The strategy has been to train Somali activists/service providers/graduates in the history of the city so they can cascade this knowledge by way of walks for the grassroots groups with whom they work. So far we’ve delivered three training sessions with activists and run two walks for women carers from the Somali community, a walk with Bristol Somali men including taxi drivers who visited for the first time such places as the City Hall, the Cathedral and St. Nicholas Market. We also ran a half day’s bus tour with Bristol Somali Elders group through Clifton (including a visit to the Grand Spa Hotel and the suspension bridge).

Most of the participants, although they have lived in the city for as long as 20 years, had never visited many of the places we took them to and emphasised how strongly the experience made them feel more a part of the city. Providing child care and transport enabled isolated people (a number of whom are carers) a rare opportunity to get together and have a break. We’ve also devised a guide to the city (available on line) which brings together some of the little-known stories about Muslims and other minority groups in the city.

The project was funded by the Home Office’s Building a Stronger Britain Together programme.

In Bristol we have been working with a wide range of community, cultural and faith groups, and institutions who share our commitment to honour the history of social justice. Our aim is to inspire everyone in the city to learn from the past in order to fight for their rights now and in the future.

In October 2017 Bristol hosted the Journey to Justice travelling exhibition alongside a programme of city-wide events on the theme of social justice. These ranged from innovative exhibitions, arts events, public debates, training programmes, practical workshops and installations. The historical walks we led highlighting women activists, strikes of the early trade unions, immigration to the city and the transatlantic slave trade illustrated a history of activism which is woven into the fabric of Bristol. You can see the scope of the month’s programme here and view all the previous events here.

Following the successes of October 2017 we are determined to build on the awareness of social justice campaigning, to harness the passion and creativity in the city and to work towards a fairer Bristol.

An evening of films on Bristol campaigns for social justice.  It will include the risings of 1831, 1980 and 1986, the demands for decent housing and for equality for women workers, a film of the bus boycott that ended racial discrimination on Bristol’s buses and some newly made films on social activism in the city.

Using the artwork commissioned for the Stokes Croft China mugs and posters created during October 2017. These will form a school project, firstly with Hareclive School in Hartcliffe but later across the city. Young people will be introduced to the stories of these activists and choose which they feel is most suited to their school. An exterior wall will be painted with the artwork to make a stunning mural.

To highlight past and present struggles for social justice, we co-produced with Stokes Croft China and local artists a commemorative, limited edition, range of mugs featuring 12 of Bristol’s social justice campaigners over the past 300 years. These are available to buy here.

An integrated project pack for teachers and educators to tell the stories of social activism in Bristol to young people. We envisage this includes:

Bristol was a hotbed of suffrage activity in the early 20th century. We are delighted to support the Women’s Voice programme of events which will celebrate our history as a city of changemakers and consider how we can continue our fight for equality for years to come.

Journey to Justice Bristol thanks Bristol Cathedral for hosting the national exhibition and our key contributors:

and thanks to our local partners, volunteers, donors and supporters who include: 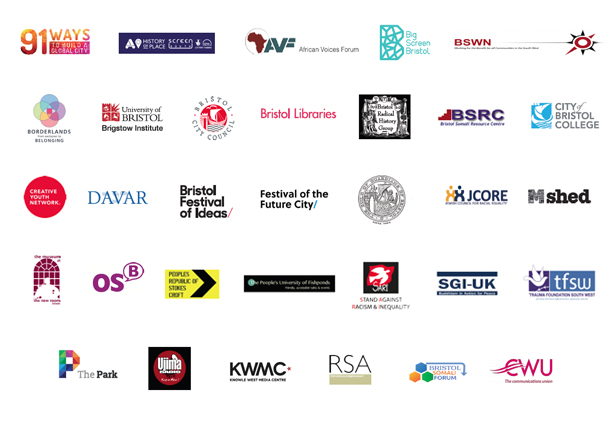