While our exhibition was at Discovery Museum in Newcastle, Rose Pearce visited on behalf of The Centre for Research in Race and Rights (C3R) at the University of Nottingham and reported back to Professor Sharon Monteith, Founding Co-Director of C3R, who invited JtoJ to partner with C3R. The award-winning Galleries of Justice offered its Special Exhibitions Gallery which is an ideal venue for the exhibition right in the city centre.

The Midlands3Cities Doctoral Training Partnership across six universities in the region also came on board as the third partner. We held an exciting taster day at the Galleries of Justice on June 20th attended by a great mix of representatives from community organisations, the city council, museums services, colleges and local arts and history groups and organisations. Participants generated a most rich range of ideas for JtoJ Nottingham to consider including focus on the city’s connection with refugees, anti-racism and community action for justice.

A large steering group met regularly and planned vivid local stories and a programme of events.

JtoJ Nottingham launched in April 2017 with a splendid march through the city stopping at sites connected to social justice, with great speeches and music:

MOVEMENTS: PROTEST, POLITICS AND ACTIVISM IN THE TWENTY-FIRST CENTURY

It was a highly-engaging, diverse and innovative day which motivated and encouraged us.  We greatly appreciated the opportunity to present the work of JtoJ to the many delegates and contributors attending the Movements conference. Thank you!

For more information about the conference, please see: movements2018.wordpress.com 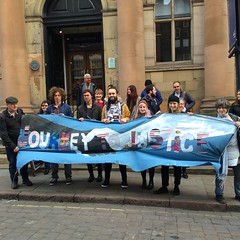 On Friday July 7th, inspired by Journey to Justice, a performance focused on the lives of Samuel Morley and formerly enslaved African American Josiah Henson chronicling both men in their older years, reflecting on their lives, struggles and achievements throughout the revolutionary changes of the c19th. Their connected story represents the campaign for freedom, equality and human rights in Nottingham, and beyond. It’s free but please register here: theironinmysoul.eventbrite.co.uk

On Thursday 20 April, the JtoJ Nottingham team’s hard work culminated in a launch event. We met at Nottingham Castle, a historic site for local acts of resistance, where JtoJ’s Secretary Pat Boyer gave a rallying speech. From there, we marched to Speaker’s Corner where we heard the new President of the NUT, Louise Regan stress the need for resistance and action. Tom Unterrainer of the Bertrand Russell Peace Foundation followed. He echoed Pat and Louise on the necessity of fighting against injustice and underlined that we must refuse to accept any injustice, no matter where or at whom it is directed. We arrived at the National Justice Museum for a drinks reception, speeches and music and the Nottingham Clarion Choir performed protest songs. Guests had a chance to browse the exhibition and enjoy drinks and time to talk. Read JtoJ Nottingham’s joint organisers, Richard Bromhall and Scott Weightman’s vivid write-up of what was a very special event:

“The Journey to Justice exhibition opened my eyes to the local, real life issues that we all are connected to. The experience and knowledge of everyone involved gave reasoning and action that all of us, young and old, can understand and take. I felt inspired, informed and motivated by everyone and everything involved with Journey to Justice.” (Sid Morris)

“The exhibition provides a fascinating dialogue between international and local stories of social justice. The exhibition has become a platform in Nottingham for exploring hidden histories and hard-fought battles. The exhibition itself is thought-provoking and when combined with the surrounding events throughout the city – from a workshop exploring social justice in videogames to a ‘Penny Lecture’ series inspired by Samuel Morley and Josiah Henson’s campaign for freedom and human rights in Nottingham – it provides an inspiring and necessary reminder of the feats of social activism.” (Professor Paul Grainge)

“After seeing the Journey to Justice exhibition, I realised there are so many stories I’ve not yet heard, so many acts of courage and bravery neglected from the history books. It reminded me that the smallest act can help to change the world and those acts are usually undertaken by ordinary people. We live among heroes.” (Richard Bromhall)

“The Journey to justice opening event was truly inspirational, to come together and hear the words of people who continue to fight for justice here in Nottingham. It reflected the message of the exhibition wonderfully.” (Grace Lee)

“It was an honour to be part of the Journey to Justice Nottingham launch and a privilege to have followed in the footsteps of so many incredible people who have marched against injustice on the Old Market Square. The speeches and performances given at the event resonated with the stories collected in the exhibition and demonstrated the continued significance of struggles of the past. The struggle continues, onwards!” (Scott Weightman)

And feedback has been great from schools:

“It helped me understand more about past happenings in more detail…. We discussed many individuals who I had not heard of before such as Bayard Rustin but I will never forget them. .. I particularly liked looking at political music and poetry and what effects and impacts it has on the world and other people. I am glad that I got to go on this course because I found it beneficial and insightful. Keep up the great work!’
Alice Carlisle. PSHE and Citizenship Co-ordinator, The Nottingham Emmanuel School

‘I took a disabled friend to see your exhibition. It really is amazing. Very full, comprehensive and with many thought-provoking ideas – such as the fact that many events happened some time ago and we are still having to fight against so much injustice still! However, there is a strong sense of human solidarity throughout which elevates it all. Great exhibition.’

It was a really positive, productive and highly stimulating day held at the Galleries of Justice (GOJ) in Nottingham where our exhibition will be hosted in 2017. The day was planned with our partners: Sharon Monteith, Founding Co-director of Centre for Research in Race and Rights (C3R) and Professor of American Studies at Nottingham University, Rosemary Pearce then of C3R and Bev Baker (Senior Curator and Archivist at GOJ), Tim Desmond (CEO of GOJ) and Midlands 3 Cities with PhD student Scott Weightman, JtoJ local organiser.

We emphasised our mission and the essential link between history, the arts of social protest and understanding social change and we showcased some of the work of JtoJ with young people and in London, Newcastle and Sheffield.

Another session focussed on stories of activism in Nottingham past and present; potential partners for planning the exhibition programme and creating the local panels in our exhibition; promoting interest in forming a Nottingham steering group and generally discussing and bouncing ideas off each other. It was an exciting and hugely informative hour and a half which revealed such a tremendous amount of creative activity in the city. We noted about 30 ideas…………….some of which were: Nottingham’s refugee history; Nottingham as UNESCO city of literature 2017; Streetwise Opera – homeless and non-homeless performers; Sash (Salaam Shalom) a Muslim/Jewish weekly soup kitchen and food bank; October Dialogues – Black History; Polish homeless men project; History of the 1958 race riots and colour bar; Child Migrant Trust HQ in Nottingham; Radical Walks; Women’s History Group; Bread and Roses Theatre group; Creating a school and FE resource packs; Nottingham’s first UK Black Lives Matter chapter.

This stimulating and highly collaborative session ended with us thinking about the way forward. Some people showed interest in becoming members of a Nottingham steering group which has been meeting regularly ever since. Nottingham JtoJ is making tremendous progress, raising funds for their work and the local history sub group is planning and researching a fantastic range of stories to feature in the exhibition.   Evaluations showed how much the participants enjoyed the day and felt highly motivated to bring JtoJ to Nottingham in 2017.

We asked: Was there an aspect of the session which inspired you or was most memorable?
“Learning more about JtoJ”; “JtoJ film clips (esp. House of Lords)”; “The presentations made me feel everyone can be involved”; “work Martin’s been doing in school and knowing that young people have engaged positively with activism, resistance and the challenge of social justice was overwhelming and gives me hope for the progress of our society”; “Group discussions about Nottingham input discussion at end.”