Journey to Justice in Lambeth

After Tower Hamlets, we moved south of the river to beautiful Morley Gallery https://www.morleycollege.ac.uk/facilities/the-gallery part of Morley College London– straddling Lambeth and Southwark. Our main aim was to involve the adult students and staff from across a rich arts and humanities curriculum drawing on the college’s long tradition of welcoming migrants and working with schools and community groups. Our launch event was held on Martin Luther King Day January 16th 2017 and we held events for the public focused on the power of art and sport and hosting local campaigners:

Our multimedia, interactive travelling exhibition was at the beautiful Morley College Gallery from January 9th – February 3rd 2017:  https://www.morleycollege.ac.uk/facilities/the-gallery part of Morley College London telling stories of less well-known men, women and children who were involved in the US civil rights movement with links to UK struggles for equality.

The jukebox played freedom songs and the exhibition included art and poetry with a section dedicated to local, south London human rights related history focused campaigns and organisations for social justice including ATD Fourth World (All Together in Dignity working to overcome poverty), the Ritzy Cinema staff campaign for a Living Wage and Save Cressingham Gardens. We also featured films by the internationally renowned artist Sokari Douglas Camp talking about her Battle Bus –  a Living Memorial to Ken Saro-Wiwa.

Our main aim was to involve the adult students and staff from across a rich arts and humanities curriculum drawing on the college’s long tradition of welcoming migrants and working with schools and community groups. Our launch event was held on Martin Luther King Day January 16th 2017 and we held events for the public focused on the power of art and sport and hosting local campaigners.

Jessica Brewer – why we brought our students to the exhibition:

To give students a learning experience beyond the classroom

To introduce students to lesser known figures of significance to the Civil Rights Movement.

Giulio: It was very eye-opening and revealed some cases which haven’t often been shared with the wider public. This encouraged me to be more aware and take a further interest in the topic, which will definitely help with my coursework

Suwrial: I found it very moving and inspirational to take a closer look into the everyday African Americans behind the civil rights movement who were previously overlooked in history. I was very inspired by their determination and drive the they possessed. Great learning experience.

A huge thank you to the gallery and college staff for looking after us & our exhibition & as always to our wonderful volunteers.

Morley College hosted a launch to celebrate both Martin Luther King Day and the arrival of the Journey to Justice exhibition in its beautiful gallery. It was a very special event, again with a wonderful turn out; a mixture of people, men, women and children and new supporters. The staff made our exhibition look fantastic and guests expressed the importance of it being displayed in the gallery during this crucial time when there is so much turmoil around the world.

The college Principal, Andrew Gower, welcomed us and emphasised the importance of acknowledging the college history with its connection to social justice and making education open to all. “Morley’s mission – to empower individuals and strengthen communities – continues to be lived out in the daily work of the college, and we’re therefore very proud to be hosting the Journey to Justice exhibition.”  It was named after one of its benefactors, Samuel Morley the Liberal MP for Nottingham for his dedication to campaigning with suffragettes, for the abolition of slavery and against poverty. Morley funded Josiah Henson who escaped slavery and came to Britain. By coincidence, Nottingham JtoJ (the next hosts of our exhibition) have chosen to include Morley as one of their examples of local untold stories! Andrew and his staff and students showered JtoJ with appreciation for our work.

JtoJ’s treasured patron Lord Herman Ouseley opened the launch and expressed his heartfelt love for Social Justice. He described the struggles for change in south London and around the world. Herman described his own journey and the impact of Stephen Lawrence’s murder. He honoured the names of many UK activists, including Lambeth based Devon Thomas who was in the room and Suresh Grover, Anthony Lester and the first Black MPs acknowledging their hardship while fighting for change and helping to shape our communities.  He reminded us we are still battling with poverty, discrimination and brutality and that unity and mutual understanding are the only way forward.

“It was most stimulating to take part in the launch of ‘Journey to Justice’. It is a powerful exhibition and it was great to hear from stalwarts such as Lord Herman Ouseley about the relevance of those old struggles to contemporary times.” (Devon Thomas)

Following Herman, Diana Skelton, of ATD (All Together in Dignity) Fourth World‘ who work to end poverty, described the struggles of people who are made to feel their experiences do not matter. ‘Poverty corrodes society.’ Amanda Button spoke about her own journey and connection with Jean Stallings and the challenges, negative perceptions and stereotypes of people who experience poverty and social exclusion, ‘we are humans of equal worth’. Carrie Supple outlined the aims and work of JtoJ, telling less told stories of collective action and highlighted the need for solidarity and fighting for issues that may not directly be our, quoting Martin Luther King, ‘We are caught in an inescapable network of mutuality, tied in a single garment of destiny.  Whatever affects one directly, affects all indirectly’ and his universal, eternal relevance to us all in times of division and fear.

The formal part of the launch ended with Maira Kargbo, an Essential Skills student at Morley, studying English and IT who recited a powerful poem ‘Still I Rise’ by Maya Angelou (my favourite poem) again leaving the room with a sense of uplift and togetherness. The poem inspired some of the poems by young people from George Mitchell School, now a permanent part of our exhibition.

That left an hour for more refreshments and time to see the exhibition.  And we gained at least two new potential bookings .Well done to the JtoJ team and the Gallery staff who organised the event. Super duper evening!

“A warm evening and a very diverse audience. Lord Ouseley’s speech was poignant and personal, encouraging us to feel empowered, as a collective community, to tackle social injustices even if change seems slow and never to give up! People were very engaged with the exhibition, and clearly moved by the individual stories depicted.” (Mary Spyrou)

“We are so happy that the launch was so well visited, and I found the speeches both touching and inspiring.” (Anna-Lena Ekenryd) 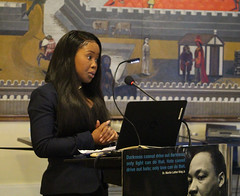 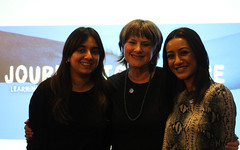 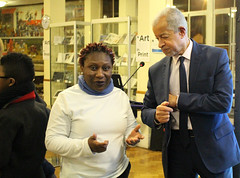 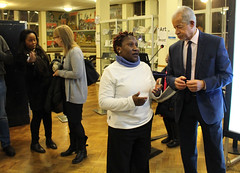 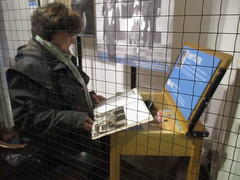 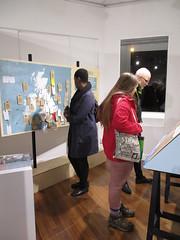 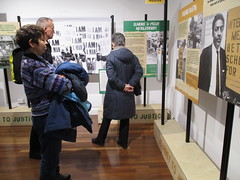 Morley Gallery hosted a fascinating evening chaired by JtoJ’s Martin Spafford with Tom Keene from Save Cressingham Gardens and Anne Cooper, Writer in Residence for the campaign; Kiv Legate from Ritzy Living Wage and local long time activist Devon Thomas from Lambeth Business Advisory and who helped found the first Black Youth Club in the 1950s. We explored key tactics of their campaigns and how to gain public, cross party support, persist and make an impact.

‘The four speakers left a very good impression on what campaigning means to them. Their human spirit was translated into what they believe is important work and an opportunity to achieve change for our common good. The unfairness, irresponsibility and injustice of what was imposed on them was a direct attack on their rights and freedom as human beings: earning a living wage and staying in their beloved estate known as home.’
Tania Aubeelack

‘I thought it was a very important statement made by one of the panellists when he said that the fight for justice is a culture in itself that can be lost if not re-introduced continually to our children. Apathy amongst young people is certainly a problem and it is true that we can become far too complacent even when our ancestors fought for something like the vote that people my age don’t even bother with. I was impressed with how organic JtoJ manages to keep their events and I have found every one stimulating.’
Yasmin Siddiqa Amin

The event segued into a thank you party for our Tower Hamlets volunteers and we were joined by new friends from Lambeth. We made a special presentation to Alison Wood who co-ordinated the 50 volunteers on duty at Rich Mix in December so brilliantly and efficiently. Thank you everyone!

Surrounded by our exhibition, the gallery was full of people keen to hear internationally renowned Lambeth based artist, Sokari Douglas Camp CBE who talked about and took questions on her work which draws on her experience of growing up in the Niger Delta and confronts historic injustices.

Sokari focused on her public artworks, including ‘Battle Bus: Living Memorial for Ken Saro-Wiwa’ (2006), a full-scale replica of a Nigerian steel bus, which stands as a monument to the late Niger Delta activist and writer and accompanying campaign #ActionSaroWiwa  It was commissioned by Platform who combine art, activism, education and research for social and ecological justice.

Saro-Wiwa and eight other activists were executed by the military government of Nigeria in 1995 after accusing oil companies of ‘practising genocide against the Ogoni people’.  A spokesperson for the Movement for the Survival of the Ogoni People said, ‘The bus is a symbol of our struggle. Now that Ken is not with us…It will give us so much happiness and strength.’

For Journey to Justice, Sokari’s work – stunning steel sculptures – is a perfect example of the role of art as human rights activism whether in response to injustice or as way of galvanising hope and unity and inspiring us to feel and act:

Films about Sokari’s work are part of the Journey to Justice exhibition at Morley Gallery, until February 3rd: https://www.youtube.com/watch?v=uHgebIDp0Gk

Journalist and film maker Stephen Adamson reflected on his experiences of reporting on football in Palestine. He talked about struggles faced by the men’s team and women footballers and the way they continue to play despite ongoing conflict and how football unifies and inspires people and can bring dignity and respect. He described the impact of poor pitches, water shortages, the travel restrictions and destruction of buildings by the Israeli army and also the involvement of Israeli-Palestinian monitoring groups who retrieve footballs kicked over settlement walls and help rebuild bulldozed community centres. We discussed the power of sport especially football, to bring people together through initiatives such as Football Beyond Borders, the Shimon Peres Peace Centre and the Easton Cowgirls in Bristol.

“Maybe the most beautiful thing that the Palestinian nation gets from football is that it gathers the whole nation together either in the country or outside.” Abdelatif Bahdari (National team player)

“We used to have many barriers in front of us as women and girls playing football.  It is a patriarchal society and they think that women should be in the kitchen and not anywhere else. So we are trying to change this and we’re trying to prove that women can do whatever men can do.” Jackline Jazrawi (Former Captain of the National Women’s Football Team of Palestine)

Stephen’s career includes contributions to The Guardian, The Independent, BBC, ITV, Channel 4 and FIFA. He has interviewed some of the biggest names in world football and stars of grassroots sports projects in Colombia, Jordanian refugee camps, Haiti, Lebanon and Israel. He belongs to a group aiming to twin Kennington with Bethlehem and with Mark Dickens is planning a collaborative, multi media project dedicated to the Kennington/Bethlehem link, ‘Kicking Against the Wall’