As a powerful means of achieving our mission, JtoJ’s first project, beginning in 2013, was the creation of a multi-media travelling exhibition focused on the US civil rights movement and its links with the UK.  Planned and researched by a team of JtoJ volunteers (see credits), designed by HKD and built by Keyboard Group, it is a dynamic mix of photos, music, poetry, art, films and audio, interactive features and installations. Using a series of ‘bus stops’ and placards we tell the stories of some of the less well-known men, women and children involved in the movement, people of all ages and ethnicities, whose voices are not often heard but without whom it would not have happened – people like ‘us’. Universal freedom songs play throughout, on our specially created juke box.

The exhibition examines what leads people to become and stay active in campaigns and what makes a human rights movement succeed.  There is also always a section telling the story of a local campaign for justice to be chosen by a team who know the area.

Watch a five-minute film of the exhibition and music workshops

Thanks to all our funders and supporters the exhibition is born and it is beautiful! A dynamic mix of photographs, text, music, audio-visual features, poetry, maps and installations. Using a series of ‘bus stops’, we focus on the stories of some of the less well-known men, women and children involved in the civil rights movement, people whose voices are not often heard but without whom it would not have happened. Happily in 2021, the University of Leicester offered to house the exhibition. Thank you!

In 2020-21 we were able to create an online version of our civil rights exhibition. With thanks to over 100 JtoJ supporters and a Magic Little Grant through the partnership between Localgiving and Postcode Society Trust. We remember Ian Caller whose generosity enabled this project to go ahead.

For the online version of our exhibition, see: www.jtojhumanrights.org.uk

You will meet: Ruby Bridges, the first black child to take her place at an all-white elementary school in the southern states, and Elmore and Peggy Nickleberry, who campaigned for the rights of sanitation workers in Memphis with Martin Luther King. You’ll find out about Janice Wesley, who at 16 protested in the Birmingham Children’s Crusade, Bayard Rustin, who organised the 1963 March on Washington and much much more, and Jean Stallings, a black single mother who was part of the National Welfare Rights Organisation. You will be introduced to Marcia Saunders Heinemann, who supported black voters registering to vote in Tennessee, and the Greensboro Four, famous for their sit-in at a ‘whites-only’ lunch counter in Woolworth’s, North Carolina. You will also read about links between the UK and US civil rights movement, which reminds us of the long history of struggles for human rights and freedom in the UK and locally – wherever we are.

In each place it tours, a cross community steering group told stories of times when local people joined together to challenge an injustice. Over 70 of these UK stories are told as part of our online exhibition: www.jtojhumanrights.org.uk

The exhibition first launched in 2015 with a superb afternoon of performers and speakers at Discovery Museum, Newcastle upon Tyne on April 4, the date Martin Luther King was assassinated, and ran until May 4th. We had over 3,000 visitors, wonderful feedback and helpful suggestions for improvements before we went to Sheffield the following year.

Children wait in a makeshift jail at Fair Park, Birmingham, Al. after being arrested. Janice Wesley is the girl smiling in the centre of the photograph, with her friend Barbara Fletcher to her right. © AP/Shutterstock

The exhibition was in the temporary gallery of the first floor at Discovery Museum April 4 – May 4 2015 and staffed by our volunteers. Most visitors came specially to see JtoJ but many were attracted by the juke box playing freedom songs and stayed to read the stories, listen to the interviews, watch film footage and engage with activities at the lunch counter. We asked for feedback and gathered heartening responses and invaluable suggestions for enhancing how and what we show next time.

A vast majority said they are now more aware of the US civil rights movement (CRM) and the history of human rights movements in the UK.  Aspects of the exhibition they think they’ll remember most tended to be personal stories and especially Ruby Bridges – her treatment and remarkable resilience; the murder of Emmett Till, the poems, music, photos and quotes. Each part of the exhibition was mentioned and many say how little they knew about links between the CRM and UK.

As for which factors are the most important in order to make a human rights movement succeed, visitors wrote: education, awareness, persistence, determination, courage, numbers, solidarity, inspired leadership, collective vision and a trigger – passion and anger).

When asked whether they now feel inspired to do anything, half say yes and they talk about e.g.: finding out more, teaching about JtoJ themes, helping people in trouble,  working harder against racism/for equality or becoming more active in Amnesty or their church. And a pleasing number of people have signed up to be kept in touch and contacted again to assess longer term impact.

‘I felt anxious on arriving and looking through all the past and present history because I want so much to understand and learn more. The exhibition definitely fed my curiosity and gave me light and understanding. Looking at the steps which have brought me to where I am and having the privilege of this exhibition was so welcome and overwhelming. It meets a need I and all of society have right now.’  Rosaleen Lyons, JtoJ volunteer 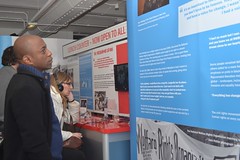 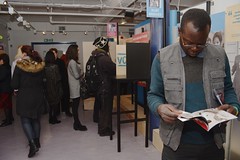