Train the Trainers – using the JtoJ approach: history, the arts and social change

See all parts together in a 35 minute film:

Thanks to a generous grant from the MSN Fund, in September 2017 we delivered a Train the Trainers course for 30 participants from all over the country who work with youth and community groups, in schools, museums and art centres, as carers, lawyers and educators. It was held at Bethnal Green Library in east London.

Our aim was to teach the JtoJ approach (history, stories, the arts and social change) in order to embed and sustain it in a range of settings. It was a great day and we now have a film of the day which is a resource in itself. Participants began trying out the resources with girls’ groups, ‘disaffected’ school groups, refugees and sixth formers and reporting encouraging outcomes. ‘It was one time they properly listened!’

Feedback was tremendous: ‘The training day was inclusive and dynamic and offered a creative way to make a SAFE space.’ ‘I think we should lobby a future government to get such approaches and stories into the national curriculum.’ ’We must emphasise the journey not just results or events. Struggles must be recognised or we are denying truth and opportunities to the next generation.’

Watch the film below, made by young people living in Richmond and Kingston who attend Ham Youth Centre. They have been appalled by the wave of prejudice and venom unleashed by events in the last couple of years. They wanted to make a film which could be used to raise awareness amongst their peers to enable them to reflect on essential issues like stereotyping, being a critical consumer of information and the portrayal of refugees. They also helped to create a resource pack with group work activities that schools or youth clubs could use to explore these issues further. (Ben Skelton, Youth Worker, Richmond). Some of the activities were based on those used at the JtoJ Train the Trainers course.

Journey to Justice is about galvanising people to take action for social justice, but it is often hard to identify whether and how this has taken place. Our project at Sir George Monoux Sixth Form College in Waltham Forest (2017-2018) enabled us to see the process happening and how positive the outcomes can be.

Monoux JtoJ was initiated by Head of Sociology Marion Permaul and her colleague Jannine Jacobs-Roth after Marion had been inspired by our Train the Trainers day. The aim was for students to identify an issue they cared about and then plan and carry out an action of some form. After an introductory story-telling sessions by JtoJ volunteers Tania and Martin – full of examples of people taking action in their communities – students got to work.

Husna, Enitan, Faduma, Ozlem, Sabeehah and Muskan wanted to do something practical and preventative about homelessness:

“So we began putting ideas together and discussing exactly how we were going to target that issue. After a lot of research, thought and discussion we realised that the main cause of homelessness for women and children was domestic violence and abusive relationships, which resulted in them leaving abusers and ending up on the street. Therefore, we believed it would make more sense to target the cause of the problem rather than homelessness itself …

We first thought we could hold an event for mothers and children in our college hall … [but] … there were practical problems as well as safeguarding issues; we wanted out project to be smart and realistic … [so] … we really started to dig deeper into how to tackle the issue of domestic violence. Finally we had it: we thought that we could educate young boys and girls in relationships, helping them to see what is healthy and what isn’t and the dangers of an unhealthy relationship.”

They felt they should get young people to think about how they handle relationships and what goes wrong that leads to abuse in the home. Evidence suggests that gendered abuse can start very young, between siblings and influenced by adult behaviour. So they planned an awareness- raising lesson for schools and took it to Year 9 classes in two local schools. Their aim was to help younger students to understand the seriousness of the problem and get them thinking about how they relate to friends and partners. With the help of games, a quiz, group discussion and film they discussed coercive control as well as emotional, physical, sexual, financial and online abuse. They also gave out handouts with addresses to contact in case of need.

Responses from Year 9s were overwhelmingly positive. Here are some of their comments:

“I learnt quite a lot of new facts about domestic violence and how it’s not only affecting women, but also men.”

“I learnt how to understand the different types of domestic violence and where to go.”

“The goal was to have an understanding … so we don’t end up in the same situation.”

“There should be more types of session like this.”

“I think it’s pretty cool how students just a few years older than me start a little organisation.”

After the session in one school, the head of year wrote back:

“The students found it really interesting and informative. I would love for you to come back and deliver to my other two form groups.”

Gulsah, Mustafa, Amy, Tasnia, Sanjida and Salma were concerned at the rise of Islamophobia and how it was affecting British Muslims’ feeling of belonging. They ran a poster campaign based on the message ‘We can’t let the myths about faiths destroy our common humanity’, to generate discussion among their peers across the college.

Amar, Imaan, Kameron, Melodie, Sophia, Taylor and Rebecca were worried by the low level of sexual health understanding among their fellow students and felt this needed to be tackled. Kameron explains what they did:

“In February the sexual health nurse came into the college and we, as sexual health mentors, went in and helped provide students with condom cards and the ability to take tests for chlamydia. Which may have seemed embarrassing to the students that took the free test but once we explained to them that there are no common symptoms for it they agreed. I feel like overall we achieved our objective because we informed a sufficient amount of people about sexual health and encouraged them to be safe when having sex.”

“Regarding the future of our journey to justice, we have been appointed as sexual health student mentors , we hope to take part in future pathway assemblies and continue to educate others on safe sex. We also plan on assisting the college sexual health nurse during her future campaigns and presentations as a way of involving ourselves further into the community and increasing recognition and knowledge of safe sex.”

Mental health and schizophrenia was the issue of concern for Jada and Ksanet so they carried out a questionnaire in college and developed materials for use in assemblies. While they did not manage to use the materials, they did comment that the project had helped them gain more knowledge so they feel far better informed about mental health awareness.

Another student, meanwhile, shared her experience:

“I’m an 18 year old and … if I were to come out as bisexual I would be made homeless. Due to faith reasons my family think that loving people regardless of gender is sin, there are very few places in which I know I am safe to be completely myself…

In college there are certain groups of people I can come out to, however that’s not the case for everyone. If I were to come out to everyone I feel there could be a lack of security due to people’s conflicting views. This could lead to me constantly having to defend my sexuality without any support, something I shouldn’t have to do…”

She took the lead in organising the first Pride event in college. As one of her teachers commented:

“College staff have been grateful for LGBTQ students in telling us what we can do better …In February, we held our first Monoux Pride – an event for LGTBQ students to loudly say ‘we’re here!’ and for allies to loudly say ‘we’re here for you!’ One of my favourite aspects of Pride was how students who hadn’t intended to be part of it, were happy to stay. … it seems the large majority of our students – from all faith backgrounds – are keen to be allies, whether they are LGBTQ themselves or not.”

The project happened thanks to the energy and commitment of Marion and Jannine working closely with JtoJ’s Martin and Tania. Thanks also to Vice Principal James Massara who has enabled strong support from the college leadership. He commented that students involved had performed outstandingly in leadership interviews.

We are delighted JtoJ was invited to help plan the same approach for a second year, this time coordinated by Monoux staff members Carol Green and Marcus Burke. Students are designing  actions on mental health, LGBTQ+ awareness and knife crime. Our hope is that the project will be a permanent part of college life. More news to come! 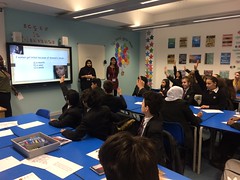 They celebrated their achievements on June 20th 2018

The project galvanised sixth formers to take action on LGBTQ, schizophrenia and Islamophobia (awareness raising); domestic abuse (teaching sessions with Y9 classes in two schools); safe sex (working with a nurse to help run clinics in college). Students received JtoJ certificates, several college staff attended and the college is committed to continuing the project next year. Staff commented that students involved had performed outstandingly in leadership interviews. Special credit due to Monoux sociology teachers Marion and Janine and to Martin and Tania for JtoJ.